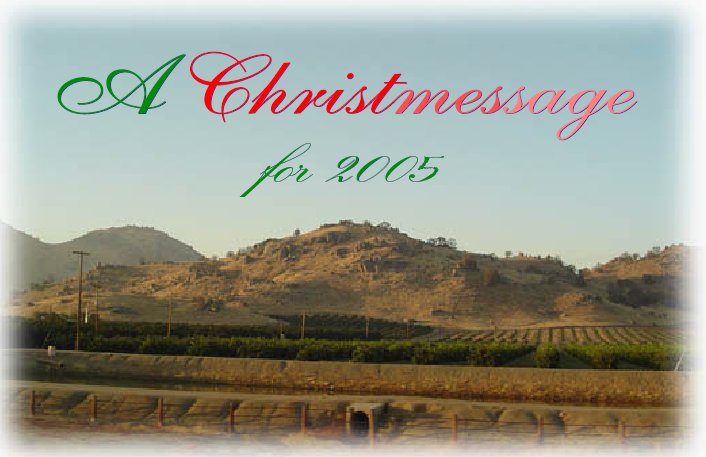 don't usually wake up at 3:00 a.m., but then my wife isn't usually awoken in the middle of the night by an earthquake.

We live in an area about as seismically inert as this planet gets. But that night our family was sleeping in our little camper at the south end of California's San Joaquin Valley. We had left Los Angeles that evening, but as we headed north through the Tehachapi Mountains, even in the fading light we were able to make out many retention dams holding back millions of tons of water in reservoirs. We had come down out of these mountains just before stopping for the night. Now, in the wee hours of the morning, it occurred to me that I had no idea what our elevation was.

What if the tremor that woke my wife was one too many for one of those dams? It was dark when we parked for the night, and I didn't even know if we were on the valley floor or on a rise. I certainly didn't know the area well enough to know where water would run if a dam burst. It was a beautiful night and our windows were open, but from outside I could hear a rumble that I hadn't noticed before. And the more I listened, the more I imagined it was getting louder.

I decided that, with so little information, it would be irresponsible to just roll over and go back to sleep. Trying not to wake the children, I found my way out of the van, and went into the truck stop to check for news.

When I got inside, there was a TV hanging from the ceiling, but instead of the usual weather and traffic reports, it was just displaying some inane late night talk show. The building itself was almost deserted. There was a teenager playing an arcade game, and the one employee at the convenience store was busy talking with some friends. If they were concerned about the earthquake, they weren't letting on. At that point I realized that if there was a wall of water rushing towards us, nobody here would likely find out before it struck. And for all I knew, it would be impossible to get away in time anyway. I resigned myself to the fact that I simply did not have enough information to act upon, and that there was really nothing to do but go back to bed.

I was still not sure if all that rumbling noise was merely the sound of a lot of idling transport trucks; it still sounded to me like it was getting louder. But I was struck by just how unprepared all of us would be if a flood from a burst dam were to sweep through here. And I couldn't help thinking about just how unprepared most people in the world will be when God's judgment begins to be poured out (Revelation 14:10, 16:2-17) on this uninformed and uninterested planet. ( There is none that understandeth, there is none that seeketh after God - Romans 3:11) In those days you won't have to go to California for earthquakes; they will be occurring everywhere. (Matthew 24:7, Revelation 16:18-20)

Later that morning we learned that these tremors happen all the time around there. (Indeed, we felt another one that very night in Fresno, 140 miles to the north.) I was impressed that the local residents, and there are more souls in California than in all of Canada, have adapted to this uncertainty. At least some of them must be cognizant of the fact that an earthquake could end their lives at any moment. They could move away, but they choose to stay and just get on with their lives. We had such a pleasant visit to California, and were treated so well by the people we met, that I would like to think that they are all saved and can live with this constant threat because they have made peace with God. However, of course, this is not the case. A great many have, but most have not.

Wouldn't you think that living with a constant threat would compel you to be circumspect? I have often assumed that having a dangerous job would help you keep your priorities straight. After all, how can a fireman or a coal miner fret about interest rates or club memberships when every time he starts a shift, he knows he may not need the rest of that punch card? It seems ridiculous, but apparently it is possible. We humans tend to become accustomed to danger. Eventually we forget it even exists. But that is when dangerous becomes disastrous.

No doubt there are those who resign themselves to fate and adopt the you only live once (enjoy it to the fullest) philosophy, (1 Corinthians 15:32), perhaps even a No Fear motto. Some may fancy themselves courageous for stoically facing down death, but God calls it foolish. Jesus said to the rich man who had stored up much wealth Thou fool, this night thy soul shall be required of thee (Luke 12:20) God never encourages a complacent attitude about real danger. Jesus said fear not them which kill the body, but are not able to kill the soul: but rather fear him which is able to destroy both soul and body in hell . That is the real danger. Yes, Jesus says not to fear the future (Matthew 6:34, for example) but never are we advised not to fear Him. The fear of the LORD is the beginning of wisdom (Proverbs 9:10, Psalm 111:10, Proverbs 1:7) and all things are naked and opened unto the eyes of Him with whom we have to do (Hebrews 4:13), hence the admonition Prepare to meet thy God (Amos 4:12).

Of course, Christians, of all people, ought to be mindful of these things. But sadly, many Christians, too, are merely going on with their lives. How many Christians are conscious of the fact that their lives could end at any moment? Far more Californians die from car accidents than earthquakes, and car accidents are not exactly confined to California. And of course cancer kills still more. And, in any case, one way or another, all of us will eventually move from time into eternity. What will we have to show for our lives when we appear at the Judgment Seat of Christ? (Romans 14:10, 2 Corinthians 5:10) Were we Christians occupied with warning the unsaved to flee the wrath to come (1 Thessalonians 1:10, 2 Corinthians 5:11), or were we consumed with eating and drinking, buying and selling, planting and building? (Luke 17:28)

We read in 2 Peter 3:11: Seeing then that all these things [that is, this world] shall be dissolved, what manner of persons ought ye to be in all holy conversation [conduct] and godliness . Ought not Christians to follow Christ's example and work while it is day: the night cometh, when no man can work ? (John 9:4)

And to the reader who has not really repented of his selfish rebellion against God, or who has set out to establish his own righteousness (Romans 10:3) and not trusted in Christ's death on the cross as the complete payment for his sins (John 19:30): please do not assume you will always have time to get around to it. Like the rich man whom Christ admonished, this very night may be your last. Behold, now is the accepted time; behold, now is the day of salvation. (2 Corinthians 6:2)

This is a well written article of admonition. I also think it would it very good to make it into a tract form with a prayer on the back so that people who would be convicted would then be able to pray to God and get saved. Then all Christians could print hundreds of copies at home and give them away.
What do you think?
- PN

A friend from Altona wrote this article and I think he did have it made into a tract form.